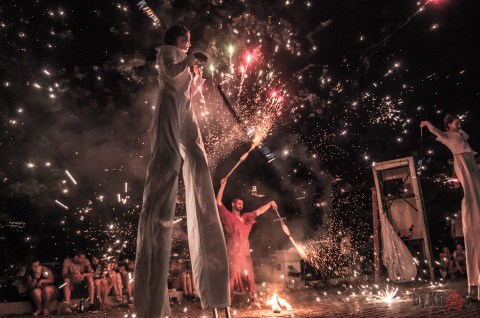 A spectacular fire show of stilts was presented last night in Veliko Tarnovo. The images of angel and devil expressing good and evil with the power of fire. The show took place in the old part of the city and brought together dozens of viewers. At exactly nine o'clock one of the most beautiful places in Veliko Tarnovo - the monument "Asenevtsi" became part of the fiery magic, which conquered the small and large.

Plamen - artist - "Fireter": Tonight I was the devil in our production! In general, the desire of our theater is to show the different faces of the fire. In fact the fire can be a living being and it is able to express sadness, joy, happiness! Juliana - actress - "Fireter": It is not a simple fire show, and there is a deep message in all. The eternal battle between good and evil. We are also the white angels, who overcome the evil and the fire stays in sacred and pure!

The fiery butterflies, the beautiful fire creatures and the magic figures were performed by the artists, who moved on stilts at least three meters high.

Sylvia - actress: It's hard as you get used to training while you learn it and feel it already as a whole with fire, then it's easy!

Radoslav Gigidgjiev - organizer - "Art Summer": Our goal for "Art Summer" is to have something every day related to culture, literature and entertainment!

Kaloyan - spectator: They have an amazing time!

Color-viewer: Very nice and very cool especially here in that specific palce and ambience. I was most impressed by the stilts, because I do not think I would never get on something like that!

Art Summer continues with exhibitions, literature and music events until the end of September.